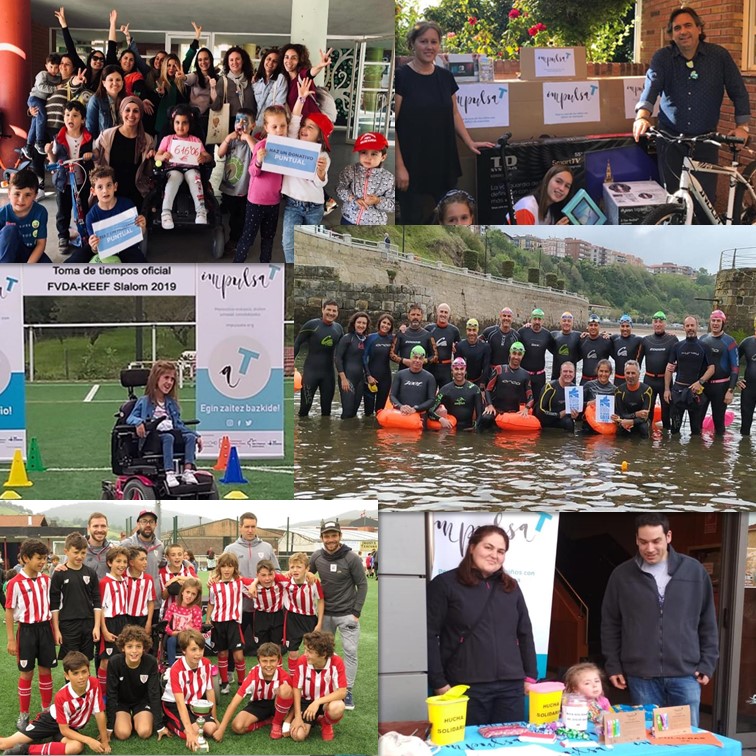 The solidarity around the families who live with an illness fills us with energy to move forward. We would like to thank everyone for their involvement in making more than twenty solidarity actions possible throughout 2019.

A solidarity event was held on March 15th at the Rocalba School in Sant Feliu de Pallerols in favor of ImpulsaT. The event consisted of a popular snack hosted by the town hall. There was also a batukada by the Planes d’Hostoles group, Danza Sana and percussion by Patricia García and Enric Pérez. The day ended with a small sample of the songs of Eduard Canimas.

A solidarity football match (Urritarra KT – SD Derio) was held on Saturday 16th March in Larrabetzu (Bizkaia). All proceeds from the box office and the sale of bracelets went to ImpulsaT.

SOLIDARITY LUNCH AT THE CIVIC CENTER OF LEIOA

On March 31st, Ur Irekiak Galea Taldea organized a solidarity lunch in favor of ImpulsaT at the Civic Center of Leioa (Vizcaya).

Solidarity stall of ImpulsaT during the Zumba activity on March 31st, 2019, held by the Department of Culture of the City of Cuarte, Huerva. Organized on the occasion of the Cultural Week.

SOLIDARITY MARCH FOR THE HEALTH OF LEZAMA IN LARRABETZU

The Solidarity March for Health of Lezama in Larrabetzu, promoted by the Txorierri Commonwealth, took place on April 7th. There were inflatables for kids and music on arrival. The collection went to different associations, including ImpulsaT.

“URBAN DISPAY 2019” IN FAVOR OF IMPULSAT

The URBAN DISPLAY 2019, the 23rd Spanish Urban Dance Championship, was held on May 10th, 11th and 12th at the Tarraco Arena. The organization made a donation to ImpulsaT which was collected during the gala.

On May 21st, at the Dolors Almeda School in Cornellà de Llobregat, a solidarity snack was held organized by the families of the class of one of the girls of the association and the AMPA. There were stalls with handmade items by school families, ImpulsaT bags and bracelets and Barça items. There was also a raffle for an Espanyol shirt. All proceeds went to ImpulsaT.

SOLIDARITY CROSSING ON THE COASTS OF THE BASQUE COUNTRY

On May 23rd, 24th and 25th, 32 members of the Ur Irekiak Galea group had to complete a 140 km swim of the Basque coast in favor of ImpulsaT. The challenge was to swim in relief the 140 km that separate Hondarribia from Muskiz. On May 25th, the swimmers were scheduled to be received in the Old Port of Algorta with different activities to celebrate their arrival. Unfortunately, due to weather conditions, they were unable to complete the challenge. However, on the 25th all the planned activities were carried out as well as the ImpulsaT stall with the sale of our items. All profits raised went to ImpulsaT.

On May 27th, a raffle was held for a solidarity basket with products from La Viña del Ensanche organized by Ur Irekiak Galea Taldea. In addition to the basket, a crockery, three suitcases and a set of knives donated by BBVA were also raffled off. All proceeds went to ImpulsaT.

A solidarity football tournament was held on 7th, 8th and 9th of June in Larrabetzu (Basque Country). There was a txosna with sandwiches and a drink. A raffle was also held. All proceeds went to ImpulsaT.

On June 16th, an ImpulsaT stall was set up in the Caixa de Burgos Auditorium on the occasion of the concert of the Miguel de Alfonso Choir and the Villarcayo School of Music. All proceeds from the sale of the association’s products and the charity raffle went to ImpulsaT.

The Fita Alta Madness is the vertical and solidarity race in Pla d’Urgell that took place on July 6th in Mollerussa. The collection of the bibs each year goes to the Petits Superherois Association, which investigates Myotubular Myopathy. In 2019, thanks to one of the families of this association, half of the profits went to ImpulsaT.

The ImpulsaT Solidarity Raffle was held on July 26th, coinciding with the ONCE draw held on the same day. A €1,000 check, a 55″4k TV, a Nintendo Switch, an electric scooter, a Dyson vacuum cleaner, a mountain bike, a 10″ tablet, bracelets and an ImpulsaT bag were raffled off.

On November 9th, “La Nocturna” Mountain Bike Ride took place in Castellbisbal. The Cycling Club of Castellbisbal is the organizer and every year part of the cost of registration goes to charity. In 2019 ImpulsaT has once again been the beneficiary association.

On the occasion of the National Day of Neuromuscular Diseases, on November 15th, at the Dolors Almeda School in Cornellà de Llobregat, a solidarity snack was organized by the Festival Committee, the AMPA and the families of the school of one of the girls of the association. There were stalls with items made handmade by school families, ImpulsaT bags and bracelets, Barça items, among others. All proceeds went to ImpulsaT.

On November 17th, in Larrabetzu, a Slalom Championship was held in the Basque Country and Navarre. There was also a stall with all the ImpulsaT products. The proceeds went to the association.

The U.E. football game took place on Sunday, November 24th. Hostoles- C.E. Anglès a Sant Feliu de Pallerols. During the match there was bar service and a raffle sale. All proceeds went to ImpulsaT.

On the occasion of Euskera Day, on November 30th, in Derio, different activities were organized such as a meal of chorizo, inflatables, children’s theater, workshops, etc. A Bilbao Athletic team jersey signed by Íñigo Córdova was also raffled off. The collection went to ImpulsaT.

On December 14th, in Els Costals de Castellbisbal, a solidarity stall of ImpulsaT was set up on the occasion of the 3rd Solidarity Party organized by the City Council of Castellbisbal. Products from the association were sold while informing interested people about ImpulsaT and Congenital Muscular Dystrophy due to merosin deficiency.

On December 14th, ImpulsaT held a stall in the Santa Llúcia Fair in Sant Feliu de Pallerols where the different articles of the association were sold and information was given about ImpulsaT and congenital muscular dystrophy due to merosin deficiency.

The contemporary traditional music group Korrontzi Folk presented its solidarity project “Korrontzi Benefic” on December 21st at the Teatro Campo in Bilbao, which stages numerous dance groups from the Basque Country. ImpulsaT had the privilege of being the beneficiary of this show.

SOLIDARITY ROUND IN THE QUINA OF SANT FELIU DE PALLEROLS

On December 26th, during the Christmas Quina in Sant Feliu de Pallerols, the village of one of the girls in the association, there was held a solidarity round to benefit ImpulsaT.


We use cookies to ensure that we give you the best experience on our website. If you continue to use this site we will assume that you are happy with it.OkRead more